You Greek fellow, with antiquity lust, you paramilitary ranger and frontiersman,
you technocrat, ex-radical bombarder, craven commander,
you orthodox-marxist-neoethnocommunist,
you fearful you,
trying to pass me your wedding ring of idea
stay put and waste away here.
I ’ll go to see the Premiere.

Without an aggravated past and a national morale
standing up for the dead, I don’t take up their fall.
No rotting ideology and saintlike piety,
no flowers on statues, parades and fake propriety.
I keep my eyes open wide and if that scares you away,
tell me about the world that won’t change – as you say.
Make it a series, make it an ad and news at twelve for me,
shut me in a bordelo with big brother, let me see.
Feed me with lies since my earliest age.
Hit me on the back while I’ m being on stage.
Fearful fellow weigh down your cross and farewell
to those protesting, promise lava and hell.
I wear black, mourn you and the children you ’ve grown
I’m ashamed, so I built a grave faraway - leave me alone!
I owe apologies only to those who are gone
and to souls that have just been born.
I calm down; now I’m more scared at my will.
I stagnate with tradition in waters dirty and still.
Then, I holler; it’s death coming sooner or later
and the people is the moral instigator.
Don’t you turn your tail away and run,
I ’ve lived so long with these demons, and chose none;
rather a beautiful folly and another tomorrow to be.
All natural elements and the whole world against me.
Lets drink water from the same spring, with mirth,
lets lie down and get on with the earth.
Lets leave all animals free, lets be nice,
lets just cry in front of innocent eyes.
And if I – such a tramp – sound refined,
take it as you like best, in your fuzzy ol’ mind.
Say, I won’t lose the only day with essence, it’s near
I’ll go early to see the Premiere. 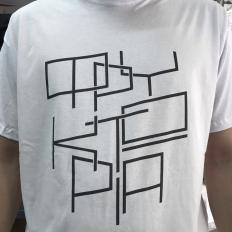