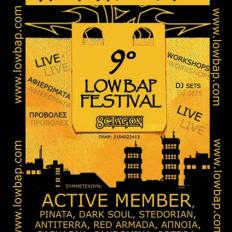 9th Low Bap Festival 27, 28, 29, 30, 31 of December 2005 -
Ston Aera Music Stage/ Petroupolis
I feel that not even a second has passed since the end of this festival...The 9th in a row festival organised by the Low Bap Foundation at the west of Attica, at Petroupolis more specifically, is such a vivid memory in our ears and soul. As we watch the photographs taken, we remember its moments and we silently wish to last longer! The people had come from all across Greece. Guys from places like Thebes, Larisa, Lamia, Kozani, Rhodes island, Chios island, Thessalonica, Patra, Crete, from various Athens and Attica neighbourhoods talked or sang to us...Many new faces as well as some older ones (in no way ''bad'' ones!) all having engraved in their eyes the excitement of participation in this, traditional by now, annually date...From our part, as we organise the whole event, it is truly important knowing that a lot of people choose spending these family days with our company. We feel in a way that not only the low bap family gets bigger but that low bap itself is a part of many other families...This report consists of a very small sample of all those great things taken place at Ston Aera Music Stage, but as there was a lot of people willing to come but didn't finally make it(mainly because of the distance; e.g. from Cyprus or abroad), we think that even this small reference is necessary. Indeed, we received emails coming from Germany, England, Finland, Sweden and from people from Switzerland! So, let's dedicate these few words to all these people with the wish to join next year the 10th Low Bap Festival! During the first day, on the 27th of December, we began by reviewing the past year as well as proposing some possible plans concerning 2006. B.D.Foxmoor, with an unstoppable word, with humor but with some vital remarks as well, commented and posed suggestions... Moreover, Sadahzinia presented (and also assisted by her) Sophia Aliferi's project about low bap, about the people following its evolution as well as the methods used by low bap in order to protect hip hop's valuable legacy. Afterwards, a long-hour live set was about to begin where seven new groups (or solo MCs) were to perform for a very first time on stage along with live sets by B.D.Foxmoor and Sadahzinia. More precisely, Lost Dreams, Anorthographi pietes, Antama, Parakmi, Liberta, Akrostichida and Praeda are the groups in question. We wish them a good continuation... At the following live set, B.D.Foxmoor and Sadahzinia mixed up their songs for the first time...B.D.Foxmoor rapped us the wrongly left-outs, as he called them, songs from his solo discography which are rarely performed during live sets...Along with Sadahzinia, he kept us a beautiful company until 2 o'clock in the morning, while the venue was filled with people enjoying it... Red Armada was responsible of the closing as they presented some tracks of them instead of ''goodnight''.

On the 28th of December, the second day of the festival, a conversation about the Low Bap Foundation took place, concerning all the initiatives put forth but mainly about all that needs to be done from now on. A live set by Antiterra, Pandomima, Parakseni Taksidiotes and Fiasko had followed. Furthermore, especially for that day, we welcomed Poedra the group from Germany who presented several fresh tracks of them. Ramon closed the live set performing a dj set!!Yes, you've read right! That kid, Ramon, taught us a nice lesson! And of course, by choosing very wisely his old-school tracks, he managed to entertain us a lot...

On Thursday, the 29th of December, at the time when 2 sketch artists called Cherubim and Gabriel (their choice of names couldn't be any more appropriate!) were sketching the faces of each one daring sitting for a few moments at the little stool, we watched a screening of some sketches made for Galera magazine. Afterwards, this special live set took place: all Low Bap Warriors entered the stage and presented Active Member tracks and so we heard, among others, some such as the follows: The fox of the moor, It's a dirty sacrifice, Wounded fairy, Silent performance, About fear, Tonight the night came quicker, Don't get mad, Graft, I wish I were, Stay there, Four minutes of intoxicated breast food...By the end of the jam, completely unexpected, B.D.Foxmoor accompanied by Jamoan and his guitar, besieged the scene, keeping us company till almost 4 o'clock in the morning. The people had kicked back on the floor and around the walls...It was just magical (and of course, with a great deal of laughter!)

During Friday, the 30th of December, a party feeling was present as Fab 888, Piñata, Stedorian, Pandora and Mindstab presented us their new tracks but mostly rapping us their older and most favourite ones...That same night was also scheduled, within the frame of Low Bap Festival, an after-midnight theatrical play at Schedia Theatre in Gazi area. The small theatre was almost filled by the 9th Low Bap Festival positive energy, with all the contributors, both actors and musicians (Jamoan, DJ Booker and Nicos Touliatos among them) giving the best of them! It is about an adaptation of Lorca's Blood Wedding, the music of which is written by Active Member.

On the 31st of December, on new year's eve, Ston Aera Music Stage was gradually warming up by hip hop sounds since 10 pm. The people who had chosen turning the year together with us were assorted and selected as well! The place wasn't completely full of course...but although, everyone there that night had counted the reversed countdown having glances full of fire...Active Member's live set began right away! At 12:01 the instrumental of Raise up your fist was already on playback... B.D.Foxmoor and Sadahzinia both on fever but however on great shape, were charging us with their low bap rhymes till morning...The people didn't stop entering the music stage filling every spot with their presence and wishes! Indeed, the first hours of 2006 found us all in a big hug as the one that only at the low bap den can be unfolded. Our celebration continued with break dance and warm wishes for the next one...May we all have a great year and always having a more wonderful time at this corner of the world where we choose to meet every Christmas... 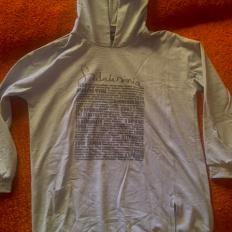