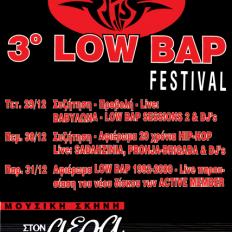 Something that started up during December 1997 by a group of friends in Perama, has grown, celebrated its third birthday and continues right ahead. From the black and white poster inscribing Low Bap FESTIVAL '97 and presenting a 17-day programme until nowadays, it isn't surely much time but on discography and emotionally aspects a lot of things have changed. The situation still remains great although restricted, focused but not miserable and anyway everyone who gets involved in it, is surely digging. During the last two years the festival has taken place at Petroupolis for technical (or municipal) reasons but the Ston Aera Music Stage as it is called, is proved to be a warm place, welcoming us all after all. Between these pages you will find a full review of each day of the festival.

First Day: Wednesday, 29 December 1999, 17:00. Everything was almost ready and set; from the turntables, the microphones and the sound system till the chairs for the conversation and the banner with Freestyle Productions' tribal logo. A short soundcheck had been preceded by some representatives of the Low Bap Sessions Vol.2 The demos album compilation. A few minutes after five the doors opened to welcome all people gathered up outside waiting for the opening of the 3rd Low Bap Festival, just three days before the ultimate turn of the century. They all had taken their place at no time for the scheduled conversation. The venue, although the great attendance of people even after the entrance's opening, it was already filled up since the very first minutes. This could estranged one who was to come for a first time especially if he considered that the live set to follow was rather more attractive than a conversation. But all of them were present just like in the previous two years and as it seemed they had a lot to talk about and listen to. B.D.Foxmoor, Xray and Loyal-T settled down behind a bench and a microphone facing the people. The start was given by the fox of the moor with the greetings and all the rest, moving to the first topic about a short review of the year gone as far as it concerns of course Low bap and Freestyle Productions. He referred to all the record releases of the year, to the live concerts taken place, the radio show (Dream Diary), the magazine press (M and Melodia) and Low Bap Festival itself which manages to be organised against all odds during the last days of every year. He later mentioned all the things promised by Freestyle Productions during the previous festival and couldn't come to life, like the website, the record shop and the carrying out of the festival back in Perama. When he finished, some people among the audience started immediately posing their questions and opinions which were answered by the three speakers, pulling the conversation for about three hours reaching the time for the projections; we watched the videotape of all the Freestyle Productions' music videos plus some video recorded moments and the clip of the compilation all shot in Perama by Active Member. After the end of the projection which lasted a little more than an hour, the live set of the participants in Low Bap Sessions vol.2, The demos began immediately. There was a mayhem at the place especially during Kaka Mantata and their For Uncle Sam performance as well as with Caradine and Morfeas of 843 and their track called Treat. Vavilona was next to enter the stage ''destroying'' the place almost like the old days. When it was past midnight and the live set ended, Loyal-T(ex-loyal, now a self-traitor) took over on the decks. After dusting down his records he closed the night with some old school tunes.

Second Day: Thursday, 30 December 1999, 17:00. When the doors opened introducing the second day of the festival, the attendants were neither more nor less than the previous day. In other words, till six o'clock it was full. The conversation was already fired up and just like the first day you would see people everywhere sitting on chairs and benches or just standing and listening carefully to the topics brought up by B.D.Foxmoor, Xray and Loyal-T. After a short report of the previous day, Loyal-T first started narrating about the birth of hip hop and its first steps, known as Old School. He recounted in his own way the most important events and states of affairs taken place from the end of '70s till about the half of '80s, travelling back in time alongside those who were listening and most of them were born approximately that time. The older ones who were present just remembered. Afterwards, B.D.Foxmoor took over who, even though he is older, chose to talk about the good years of hip hop, regarding, therefore, the period from '85 till '92. As far as it concerns of course the American or not Greek hip hop anyway. The last to speak was also the youngest of them, Xray, who talked about the approximately last eight years, from '92 till nowadays. In two hours time since the beginning of the discussion a well decent retrospect of hip hop history had been unfolded. After they solved all the audience's questions, a lot of people asked for one more projection of Freestyle Productions' videotape, since some weren't present the day before. The projection finally ended and it was eventually time for the live set. The venue was cleared from all the chairs and everything was ready to welcome the Lady of Low Bap, that is, Sadahzinia and the group of Prohja. Alongside Projha, Xray also entered the stage. The act lasted almost one and a half hours and most people were pleased. Xray continued the evening by playing some hip hop as well as some low bap tunes. Around two o'clock in the morning, Ston Aera Music Stage was turning slowly emptier as everyone was going, probably, to sleep in order to gather up strength and endurance for New Year's Eve the following day.

Third Day: Friday, 31 December 1999, 20:00. On the last day of the 3rd Low Bap Festival and of the Millennium, the time for the doors' opening seemed would never come. It did come though at one point, and despite the predictions, the venue had been warmed up by the people even before the beginning of the conversation. Topic of discussion: a low bap retrospect from 1992 till 2000. There were a lot of things both to be said and questioned concerning the beginning of Active Member, the first years, the naming of Low Bap and many more that took place during that period and either have been forgotten by some or, simply, some others didn't manage to live them. Afterwards, the three of them (B.D.Foxmoor, Xray, Loyal-T) started up another topic. On the occasion of the release of the compilation Low Bap Sessions vol.2. The Demos and its warm welcome by the people, the three of them mentioned a few words about what one could meet in his effort to deal with hip hop and how he could avoid some unnecessary moves and so express more easily what he holds inside his soul. Indeed, several guys from the audience had something relative to ask about and it seemed for one more time that those who are interested in and flirt with the turntable and microphones are not few. After the end of the conversation, Stab of Brigada played music from Freestyle's record collection until midnight when the live presentation of Active Member's new studio album could begin and of course, the turn of the year. When a few seconds had finally left, everyone at the venue started to countdown shouting loudly. When they got to zero they all left a scream, as a goodbye to the year gone and a welcome for the days to come. The album was ready immediately to be sold to the ones wanting to obtain it from the very first moment and plus, along with the collectible added sleeve which was numbered and had both a drawing of the sun-symbol of Active Member and the date and time of that day. 1-1-2000, 00:00:00. Just a few minutes after the arrival of 2000, if not immediately, the live concert of Active Member began, presenting firstly the new songs by the order of the tracklist to a delirious audience which was absorbing the words before even been dissolved into the air. The people were also participating at the Guardian Angel, You will not find me and Where are you? performances, having heard(and copied) them only once before at a Dream Diary show a few days ago. When all the Strange days, wonderful days ran out, the concert continued with songs coming from previous albums of the group. The act lasted for four and a half hours after midnight until they didn't have anything else to say or they would just collapse if continued, since the fatigue of all the three days started to manifest. But a little later, they seemed to forget this fatigue since they started playing records until morning when the track finally arrived (may he be well) to transfer all the loaded things and equipment back to Perama...See you all next year! 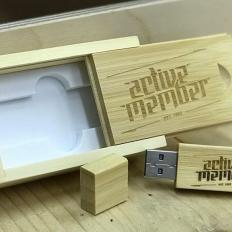