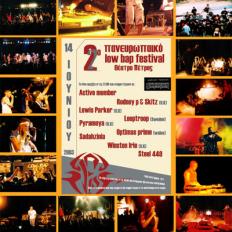 Second European lowbap festival – 14/06/03 – Petras Theatre
I still have the bass and the beats as well as the lyrics and scratches from the 2nd lowbap festival echoing in my ears. Whatever I may write to describe it could sound ordinary but how else could I express it? It was an amazing experience, like the ones that force you exceeding yourself, digging them from the beginning till the very end and learning continuously more. Everyone who didn’t managed to come last Saturday, 14 of June at Petras Theatre, just missed our feast! First of all, the price of the entrance ticket was the lowest of all the other concerts and festivals organised during this summer in Greece! Let the fact that you could watch a great number of groups! As for the 1500 people gathered around the scene and up in the seats section, I hope they were not disappointed when leaving the event…This festival had been organised for at least three months. We had reached our limits several times as all the things taken place during the evening needed millions of little details to be solved which could easily get you bored. As you aren’t able to know if it will finally work as planned and what the final result will be, it’s always about a bet, a risk being taken. Thus, we were all very anxious, having also a lot of ‘damned’ moments (for the sake of politeness I am not expanding more) while the stress and grumbling were just unbearable…But as you understand when it’s over that all have worked better than you expected, you start liking again and just can’t see the time to set up organising the next one!
Well, well! On the 14th of June, the people started gathering since 4 o’clock in the afternoon. The soundcheck was already taking place at that time on the big scene, but the live sets would begin much later.

Nevertheless, at 6 pm the small scene of Petras Theatre was full of action. Many groups were present, while the people were warming up even more the atmosphere of the, undoubtedly hospitable and renovated, small theatre.

Firstly, a dj show had been taken place being also part of the workshop as anyone could intervene asking questions about or proposing something new about the technique. Afterwards, the time for the lowbap groups had come to get up on stage rapping each of them some songs. Several new tracks had been heard as well. More precisely, groups like Antarta (with a new EP), Dark Soul (with a new LP), Pirines Iaches, Inopia, Social Waste, Kako Sinapantima, Pinata, and Vavilona (presenting their all new cd-single) had all entered the stage.
As soon as the live sets at the small scene were over, the people took their places on the big scene. The lights were turning off, while the moon was getting higher and higher above our heads, either for us to stare idly at its rise or to watch better itself all those that were about to begin…Optimas Prime takes place upon the stage. Do they still need introduction? I’ve told you about them so many times (!!!) It’s a DJ team from Wales with a lot of distinctions and original ideas. They have already visited lowbap three times! And as they assured me, they will stay for good. Optimas Prime presented us a show differentiating a bit from the one performed at their previous visits. The people corresponded very well, having in mind that they still try to understand what is happening when two pairs of hand touch the vinyl record, the generators and the mixing consoles…Still, whatever you hear coming from this group is played live, at that precious and specific moment, plus the fact that every time I watch them they become even better, faster and more impressive. I couldn’t mention their guy named Michael Stagg who plays the flute and keyboards along the non stopping scratches. After the, almost alien djs, Pyramoya had followed. It’s about a group from Brixton, London which closely cooperates with 8ctagon on releasing its first album. Having already a chance to watch a live set of them in London, I must confess that they pleasantly surprised me with their performance at the lowbap festival. They managed loading the audience with even more pulse, rhythm and joy. As for those who were backstage, like Rodney P, Skitz, Lewis Parker and B.D.Foxmoor, had literally started up a party under the sound of Pyramoya’s music.

After them, Lewis Parker took over the microphone while dj Caramac settled down at his place behind the decks. The 26 year-old rapper had been impressed by the enhanced place and the people watching, while we, on the other hand were happy for finally having him along us singing Shadows of Autumn; a well loved song dating back from the Dream Diary radio show time. Lewis Parker executed a rather long and truly interesting programme. Fifty minutes later, Loop Troop from Sweden entered the stage. The figures of Promoe, Embee, Cosmic and Supreme presented a really joyful show often asking for the people’s participation who almost everybody among them was already dancing. There were times when they were given to dancing movements synchronised with their long beat reggae style songs. It was ok! A little weird though, but fine. The improvised party behind the scene was non-stoppable letting both Rodney P and Skitz to suitably warm up and get up on stage on a perfect mood and form…The people of lowbap know them both very well because of the Dream Diary radio show; they are among the oldest and best of their kind. Rodney P hadn’t stop thanking the audience and even more he was thanking B.D.Foxmoor himself, who responded by saying that the people would think that he had paid him to do so, plus they suddenly got up on stage together performing a freestyle. Skitz, on the other hand was stopping every now and then the record playing, coming forward to take pictures while B.D.F was restarting it. I was personally impressed by Rodney P’s directness and simplicity with people; he had descended from the stage, getting among the audience and started dancing and singing with them (sounds familiar!) He was teasing the ones at the front rows while he was treating them from his own bottle! Deification! Big up! (As he himself continuously was saying all the time.) A short time after midnight, the moon, being right above the stage by now, along with dj Booker set Active Member’s Intro. B.D.Foxmoor, being already well warmed up from the performances of all the festival’s groups, gave the very best of him. I, myself (Sadahzinia) and Totem accompanied him and we presented some favourite songs in spite of the quite strong breeze which suddenly had arisen. Certainly, we were taken over by the liking and joy of the people and our whole body was dancing at almost every beat of the tambourine. There were surely all very precious and perfect moments with the people down the stage looking to absorb every word…Adding to the song that says all the beautiful things come eventually to an end, I say that we must set sail for the ones to come.

Let’s also report the festival’s ending where Rodney P, Loop Troop, Skitz, Lewis Parker, Dj Caramac, Pinata, Pyramoya and everybody else filled the stage. They freestyled upon the beat of Be careful where you step and the evening closed singing The wind blows against us. Around 1500 persons in total, along with some 30 of us upon the stage were clapping hands until they started to hurt…See you all next year and may nobody be missing. Sadahzinia 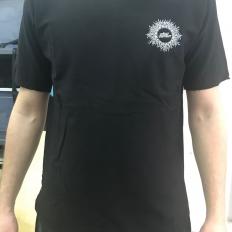