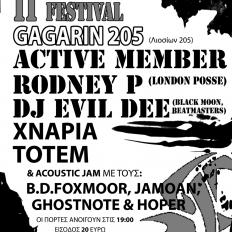 That is, if I understand correctly, we are going to complete a dozen of festivals! We are marching at full speed towards the 12th lowbap festival…The marks left by these days to both our mind and ears are still fresh. There was, actually, a rather anxiety about how could a Low Bap Festival be unfolded in such a big live space like Gagarin205. Over a decade now, we were used to smaller spaces where a lot of activities were being held even earlier in the day. However, this year, the festival was dominated by singing acts just like the ones lowbap offers so generously to us. And, eventually, it wasn’t a mistake doing so.
Since early in the evening, Dj Ponte along with Dj Moya were playing, mixing and scratching upon well familiar or less beats, warming up the stage for good. The two days scheduled at Gagarin were focused at the live sets of Active Member, therefore B.D.Foxmoor and Sadahzinia entered the stage rather early, accompanying us up until 2 or 3 o’clock in the morning. Both with great joy and relaxed didn’t stop communicating to us their mood and energy from above the stage.
Rodney P, a grand figure of british hiphop, having repeatedly appeared in the past at shows in Greece, was also performing along with them. He didn’t stop shouting lines like ‘I’m a lowbap soldier’ and ‘I’m Active Member’! He rapped many songs of his, making the people below the stage dancing without a stop while several times he descended down among the audience so he could sing with them.

Furthermore, Chnaria, Flaco and Totem also got up on stage. While upon the videowall various videos were continuously playing, Rodney P with both B.D.Foxmoor and Totem were improvising upon the stage…

The acoustic set that followed the Active Member live concert was a truly delight. Jamoan, Hoper and Ghostnote travelled us in whisper until the very beautiful and left us there…Without having it prepared, they also played the melody of Rodney P’s Believe who on his turn gave us one of his best ever performances of his life…Both evenings at Gagarin were ending with an enormous hug by the people and all the contributors upon the stage singing The Scarecrow. The photographs taken only describe a small part of the magical feeling diffused at Gagarin during the 27th and 28th of December 2008 but it is the most appropriate way for a remembrance.

The next day, the Low Bap Festival continued at a place named Zucchero in Menidi, where all the lowbap groups and solo artists took part in a marathon live set.
Photographs taken by Kelly and others. 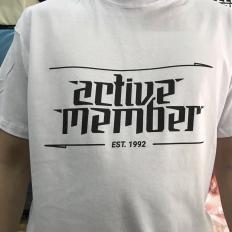