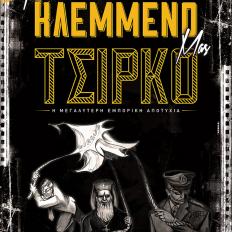 Spring 2012. Greece, which is going through a major crisis - not only financial, is into the rush of two parliamentary elections.BD Foxmoor (Active Member) and his crew, despite the political and social climate of the time and about 40 years after the first theatrical play "Our Great Circus", form "Our Stolen Circus", to share with us their documentation of that era until today, blaming on the worst generation, the generation of the political change-over (1974) the "faults of whom have not been avenged".
This documentary is about the journey of this blasphemous circus all over Greece and Cyprus.

Press Release: It has been almost 40 years since the very first performance of that big circus. Many people still treasure that night deep inside them and carry it along as a precious remembrance while some other burden them down as a curse. For some like us, luckily, that night leaves us just the feeling of an unavenged fault which has been blamed by nobody yet to this whole generation, the worst generation of all in this weird place, the generation of after the 74 political changes. Thus, without being ethically weighed by memory and this dirty time, and surely with our nerve in plain use, we took the decision to share with whoever may endure it, our own blasphemous deposition of those last 40 years. For clearing out for good, we don’t represent the righteous and noble. Simply, it’s just the opinion of those who don’t own anything good they have achieved in their short life, to none of the dirty sell outs of that time. We are standing in front of every each one missing that time to make him feel in an awkward position (if he is still able to feel this way) and to remind some people that an undeclared group of trumps still exist who doesn’t even know about the taming procedure of politics, has never passed through the narrow path of history and has not settled down even for a minute at this extremity of the mutes.

Therefore, I, B.D.Foxmoor of Active Member, Brak of Chnaria and Flaco start a journey shouting to everybody that infamous old ‘circus’ had been stolen and we won’t let them as long as it gets through our hand, to reinstall it. From 20 of April 2012 till 16 of June 2012 we will stop at every call inviting us to share this start up. May we meet, therefore, at the very beautiful.