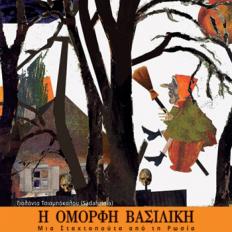 A few words about the tale: This tale was first told many years ago at places where there was no books nor television. It is about the well known to all of us story of Cinderella. Similar stories can be found at many places of the earth, conveyed by different people in different languages. From the distant China and the Himalayas' high mountains till the exotic Hawaii and the frozen Alaska. From the African jungle till the enchanted Ireland of the elves and the dwarfs. From the Russian villages till the tepees of the Indians at Mexico and from the deep forest of Norway till our grandmothers' fire places here in Greece.

And as long as the main idea remains the same, the ways of telling such a story are simply countless. All people add or remove elements according to their own habits and cultural background. Even the time line where each story is written is of great importance. Just think that a Greek historian two thousand years ago wrote about an Egyptian king who was searching the beholder of a beautiful sandal. Could this sandal remind you a bit of Cinderella's high-heeled shoe?

Indeed, there are at least 3.200 stories in various books reminding the one of Cinderella. And so many another ones, or even more, which are alternating every time, travelling from mouth to mouth. Some have dragons and knights while others have horses instead of coaches, some have fairies and others have magical fish, some have talking birds while some others have bulls. You will rarely meet the name Cinderella again. In Greece she is called Margaritarenia (=All Pearled girl), but the Indians call her Utsitzisku, rather in China was named Yeh-Shen and the Egyptians knows her as Rhodopis. In every case, it is always about a child who has patience, makes clever decisions, is courageous and kind-hearted at the same time. In a magical way she manages to show to the others the beauty of her character. She makes mistakes nonetheless, but she is also aware of their cost. Above all, she wishes of creating a better world and later she transforms her wishes into reality. Maybe we can all recognise ourselves in the eyes of this child. She wanders for years now at the four corners of the earth and tells stories about every land and every people. These stories are so different the one from the other as we people  are different the one from the other. And for precisely this reason it is well worth knowing them better.